Yeah I’m hoping onto this train.

So, have a post of a mechanic inspired by Shadow Pokemon(one of my favorite gimmicks of Pokemon), and the corruption mechanic from Sundered, with my team of Legiamon being at the end. 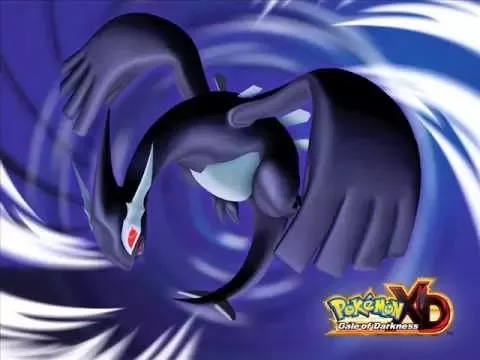 (This image, like all Pokemon stuff, belongs to Nintendo, it’s just a good (if tame) example of a corrupted mon)

Within the world exist unholy artifacts called ‘Abyssal Mutagen’, shards of eldritch power borne of long dead gods. When used to perform a ritual with a Legiamon that has a type which matches that of the mutagen, the mon can be filled with that eldritch power, corrupting it into a stronger form.

Only a fool would use their power.. a fool like a desperate player character in need of a edge. The power they grant is great, but twists those who wield it.

Corrupted Legiamon resemble mutated forms of their original species, with a lovecraftion theme to said mutations.

Mechanically, the Corruption grants the mon a Move determined by the Mutagen, and the ability to roll it’s HD as MD that do not leave the pool. However, when rolling it’s HD, it takes damage equal to the HD’s sum per move.

And here’s the template for Abyssal Mutagens:

Type: What type(s) the Mutagen is. The target must possess all of the Mutagen’s types.

Gift: What it’s mutations tend to look like. Note. Tend. Go nuts as long as it fits the theme of the Mutagen.

Ritual: What you do to use it. Performing the ritual consumes the Mutagen however:

Move: And what move it grants.

Form: This Mutagen resembles a purple liquid that hums with the hissing of death. You feel weak just looking at it.

Gift: Serpentine mutations, such as snakes for hair, limbs fusing into serpent tails or heads, gaining scales and fangs...

Ritual: Fill a empty serpent’s fang with the poison, then drive it into the heart of the mon. Their spasming flesh shall push it out without permanent harm.

Move: Yiggic Toxin: The mon bites their prey and injects them with lethal poison. One target with a level less then the user’s must Save or drop to 0 - [sum] HP.

Antipophiss, a unique Rock type. This Legiamon resembles a large serpentine statue, made of dark blue rocks. This Legiamon was a ancient weapon of mass destruction, unsealed by the tamer who discovered it. In combat, it buries it’s enemies under the sand it creates from the surrounding area. When it Levels Up, it’s powers go wild and create a perpetual sandstorm that shrouds it, anything that becomes lost within it breaking down into sand.

Desertifcation: The target saves or they slowly turn to sand. If they fail the save, then at the end of their next [dice] turns, the target loses HP equal to 1/10th of their max HP as their body collapses into sand.

Centicide, a Bug Type. This huge and blind centipede like Legiamon changes through the color of the rainbow as it moves. It hunts by it’s incredibly strong vibration sense-slash-hearing, and can hear your heartbeat from a mile away. It is extremely possessive of it’s tranquil forest territory, and anything that disturbed the silence will be torn apart by it’s saw like teeth. When it Level Up, it’s antennae, and hence the range of it’s hearing, grows.

Hundred Rend: The target takes [sum] damage as they’re rent by the Legiamon’s teeth. At the end of the subsequent rounds, they take X damage, where X is equal to the damage they took from this move last round minus 1(minimum 0), as they bleed.

Golple, a Grass Type. This Legiamon resembles a apple, if apples had golden eyes pressing against it’s skin from the inside, and where dragged around by the hand of blackened roots that grows from it’s stem. They’re dangerously helpful, shoving their regeneratively petrifying flesh down the throats of any injured things. When they Level Up, their flesh turns to gold as the eyes bulge and break through the skin. They’re the other sexes form of the rare Goldemaw, a mouth-shaped Legiamon made of roots from a tiny little golden leaf, that injects it’s seeds into statues with it’s teeth.

Midas Flesh: Tears off a chunk of it’s flesh and feeds it to a wounded target. The Golple loses [dice] HP, while the target gains [sum + dice] Gold HP. Gold HP functions just like normal HP, but if a creature has no non-Gold HP, it is turned into a golden statue until it’s healed.

Crawmag, a Fighting type. This Legiamon resembles a brown praying mantis shrimp the size of a child. This Legiamon punch with such force it can’t be seen coming, and even if it misses completely it shatters bone, and wanders the dried out sea in search of a challenge. Despite it’s challenge seeking nature, it’s pride means it will not fight without being paid before every attack. When it Levels up, it clads itself in armor made from the bones of it’s foes, it’s club like raptorial limbs gain bone spikes fashioned from it’s armor, and of course, it gains two more such limbs.

Move: Soundbreaker Punch: The Legiamon punchs with such speed it breaks the sound barrier. Deals [sum] + [dice] damage to a single target.

Kniise, a Flying/Ghost Legiamon. This horrible bird resembles a translucent brown goose. They are born with the dead’s hatred of the world in their beady red eyes, and are always clutching a knife in their beak. When it Levels Up, it’s feathers turn into brown knives, and it gains the ability to glide silently despite the horrible racket the knife feathers make.

Horrible Knife: The Kneese attacks the target with their knife in a honking frenzy. The target takes [dice] damage, then, if the target has [sum] or less HP, they promptly die horribly as a vital organ or artery is punctured or cut.

KOMBAT KORAL, a Fighting Type. This one looks like a brown-and-black mass of brain coral, being shuffled about by anemone tentacles. When it levels up, the anemone becomes longer and bioluminescent. A JUDOCOPUS from a rival dojo keeps following it around and hassling it.

PARALYZING FLURRY OF CHOPS AND KICKS. Deal [sum] damage; the target is frozen for [dice] rounds or until they save.

Ovumnade, a Dragon type. A temperamental and wingless dragon with sticky yellow flesh, which uses it’s broken egg shell as armor to protect it’s vitals. When angered, it can detonate the chemicals responsible for it’s stickyness to create a massive blast that levels the surrounding area. When it levels up, it’s whip like tail is covered in sticky grenades it can fling at it’s prey.

Move: Detonation: The user explodes(but takes no damage). All other creatures within [sum * 5] take [dice] + X damage, where X is equal to how much HP Ovumnade has lost.

Arkos
Heya! I’m just a trans woman writing about the stuff she likes as I make my way through life.